Tattoos in the Workplace: Phasing Out the Stigma

HomeBlogTattoos in the Workplace: Phasing Out the Stigma 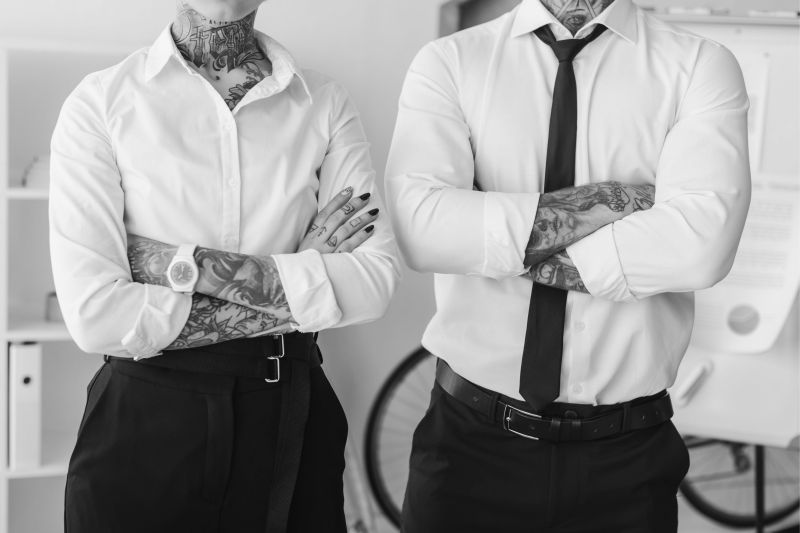 Tattoos are on the rise and it is no surprise that more people are getting tattooed, so workplaces, too, should keep up and adapt, right? Well, it is a bit more complicated than that. Historically, it has long been considered taboo to have visible tattoos at work and some even referred to them as "job stoppers". Today, while some consider tattoos as a way of life, others see them as a fashion accessory, and some confine it to society's fringes or rebellious elements, outcasts, unprofessionals.

In today's increasingly inclusive environment, many wonder if tattoos are still that big of a deal at work? Do they still present a problem?

If you're curious about getting a tattoo but uneasy about future job prospects, read along as we discuss current attitudes towards tattoos in the workplace and top careers and industries for tattooed persons.

With a Tattoo on My Body, Will I Be Hired?

If you have visible tattoos, you’ve more than likely considered the possibility that an employer may choose not to hire you. However, it is easy to answer this question with a resounding yes, you can be hired with visible tattoos.  Nevertheless, there are some factors to consider before committing to certain tattoo placements or particular working industries. When you consider getting your first tattoo, or even if you already have one, you need to understand the current workplace atmosphere regarding visible tattoos.

Things to Consider Before Getting Tattooed

One important – maybe the most important factor to consider – is the tattoo placement. If you are contemplating a tattoo on your face, neck, or hands, it is important to understand that these areas are still considered radical by certain employers, and you may have a difficult time being accepted in corporates or jobs that revolve around face-to-face customer interactions. Aside from the tattoo placement, it is also important to think about the specific theme, imagery, and content of your visible tattoo. Although an employer might be lenient when it comes to visible tattoos depicting flowers, pets, or fine art recreations, they will probably not allow visible tattoos depicting violence, graphic sexuality, or curse words. If you're planning a kooky, offensive, or gruesome piece, we certainly don’t discourage you and we are not here to stop you. Just take care of where you place your design so it's not visible in a work setting.

Has the Social and Cultural Stigma Finally Lifted?

Business leaders and politicians have spent a lot on tattoos, including the Canadian Prime Minister and Lachlan Murdoch, CEO of News Corporation. Therefore, it would naturally follow that getting inked is officially acceptable if national leaders and captains of industry do it, right? Well, not quite.

The case might be different between countries. While in some companies, people may feel comfortable showing off their body art, in the UK, US, and many other countries it’s still legal for companies to have a “no tattoo” policy.

Traditionally, the military sector has been fairly conservative regarding tattoos. The US Army, for instance, has detailed guidelines about what is and is not acceptable. The U.S. Army prides itself on a clean and neat presentation. Soldiers cannot have tattoos on their wrists, hands, neck, or face and the only exception to this is a ring tattoo, one per hand. It wasn't until two years ago that Nellis Air Force base in Nevada opened the first tattoo parlor on base, fittingly named "American Tattoo Society". It is open seven days a week to accommodate as many "airmen" as possible and is known to be a major morale booster for all service members and military personnel.

More conservative industries like financial services, banking, and healthcare, are more conservative when it comes to tattoos to avoid cultural confusion. Despite cultural exceptions, conservative corporate attitudes are generally in line with social attitudes, and even in advanced and modern countries, it is still the case.  Research conducted for the University of Northern Iowa by Kristin Broussard and Helen Harton reveals that even in the US, wearing your art as a sleeve can result in social stigma.

Fortunately, in some areas of the world, like Canada, there have been laws passed to protect employees and job seekers from discrimination based on their tattoos. This has had a positive effect and assisted in shifting opinions towards acceptance. Unfortunately, it’s pretty difficult to prove that an employer chose not to hire you because of your tattoos, so it’s wise to always use caution when displaying tattoos in job interviews.

According to Johnny C. Taylor Jr., the president and CEO of the 300,000-member Society for Human Resource Management based in the US, tattoos are subject to sliding scales of acceptability. Having a tattoo himself, he confessed that his company might not hire someone who has one. He added: “In terms of most acceptable to least acceptable, if you can hide it, then it’s ok “.  Then there are employers who say they don't mind tattoos as long as they don't cause a distraction; they can't be something offensive like a woman's scantily-clad tattoo on a man's biceps. Certain industries believe that customers and clients are repelled by observable body art so that’s why they avoid hiring people with visible tattoos as long as they can hire a competent candidate with no visible tattoos or no tattoos at all.

In the category of just non-acceptable tattoos, that means those that show up on your face and that no one can avoid looking at or those that are truly controversial, like swastikas.

While visible tattoos certainly aren’t embraced by all in the workplace, recent studies and polls have concluded that around 1/3 of companies now see no issue with employees sporting permanent body art. While this is wonderful news for those of us with all covered visible tattoos, there is still progress to be made.

“Initially I thought I’d have to cover them up at work, but I think it’s so accepted now, the only reactions I get are complimentary”, said Anthony Fawkes, an IT consultant for various investment banks in the UK.

Choosing a career path or job that is accepting of your visible art is crucial, as otherwise, you could face job insecurity, harassment in the workplace, and harsh restrictions.

There are many career paths where being visibly tattooed will not affect your employment. Take a look at the list of the most tattoo-positive industries and careers we compiled for you to help you on your employment journey.

From make-up artistry to fashion and graphic design, those who get paid to be creative are typically free to sport visible tattoos. So, if you’re interested in a career in anything related to beauty and trends, chances are that your job will be much more tolerant when it comes to visible body art.

Make sure to keep in mind that these aren’t the only fields and careers open to visible tattoos! As stigmas around tattoos fade, more companies are deciding to hire visibly tattooed employees, choosing to value skills and experience over traditional corporate attire standards.

Don’t worry about your future career too much, Tattoo lovers

As complex as tattoo designs may seem, attitudes about tattoos are just as complex but for fans of permanent tattoos, it is a trend that is here to stay. Modern society continues to turn its back on visible tattoos, resulting in less discrimination against tattooed employees of various industries. Careers, companies, and job paths today are increasingly indifferent to tattooed employees, and even welcoming of them. Finding high-quality employment with tattoos may require a bit more effort, but it is now more possible than ever before.

Tattoo Removal Guide: 4 Ways to Say Goodbye to Your ink!